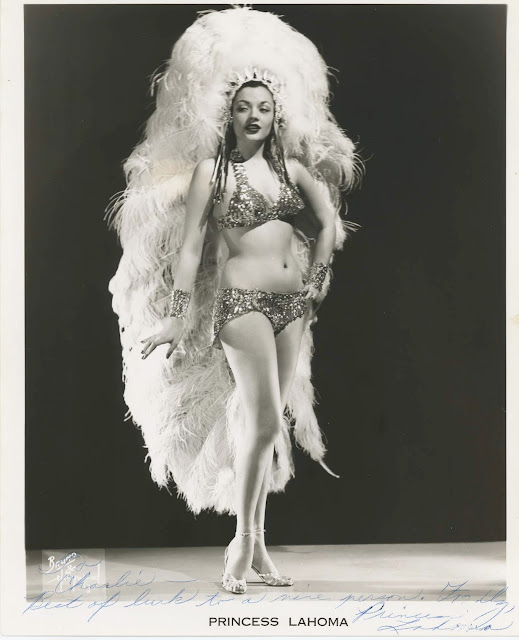 This month my wife and I celebrated her birthday in Las Vegas. We go every year, not to gamble, but just to walk around, explore the new hotels, see the shows we haven’t seen, and watch the people. We saw a Cirque du Soliel show based on Beatles’ songs at the Mirage, a comedy show a Planet Hollywood, and a variety show at the Rio. We wandered through the Venetian, watched the gondolas, took our pictures with celebrities at Madame Tussaud’s wax museum, and of course I had to visit the Burlesque Hall of Fame, where my cousin Lahoma is featured.

It was six of seven years ago when I found out about the Burlesque Hall of Fame. A young woman e-mailed me from New York City where she was working as a nanny. She had read an article I posted here on my blog about Lahoma and wanted to know more about her. Her hobby was collecting pictures about burlesque stars from the past. She had a web site where she had collected hundreds of pictures and newspaper articles about burlesque. She shared what she already had about Lahoma, and she told me about the Hall of Fame in Las Vegas, which she was helping with her research. We corresponded for several weeks sharing information and eventually we collaborated in writing a little article about Lahoma for the museum.

I haven’t heard from my friend for a couple of years but I hope she compiled her work into a book. She certainly did an admirable job with her research.

Just visited her facebook page. She still has our article about Lahoma posted. She’s selling burlesque memorabilia on EBAY to raise money to pay vet bills for her aging dog, so check it out. http://www.burlyqnell.com

Visiting the Hall of Fame reminds me of what wonderful memories I have of my cousin Lahoma, and makes me think that I ought to record more about her life than just her time dancing.

During the late ‘40’s and early ‘50’s, when Lahoma was dancing, I was in elementary school, and I was madly in love with her. She was beautiful, glamorous, and she sent me stuff. The walls of my room were covered with pennants from all over the United States. I wrote her letters. I used to have a copy of one. On it I had drawn a picture of “Elfie,” the hero of my mother Wenonah’s bedtime stories.

When Lahoma recycled her costumes, she gave them to me. I remember an Indian head dress made of purple ostrich feathers. It had a long train, or at least it was a train for me. On Lahoma, who was almost six feet tall, it probably barely reached the floor. I can’t imagine what our neighbors thought, seeing me run around wearing it. My cousin Steve says that he had one of her ostrich feather head dresses too that was white. It’s probably the one she’s wearing in the picture I put at the beginning of this article.

Lahoma’s mother, my Aunt Kaliteyo, lived in Oklahoma City. She wasn’t married, and she spent a lot of time at our house. She ate my mother’s corn bread and had milk and cookies with me when I got home from school. We kept up with Lahoma through Aunt Kaliteyo.
Every once in a while, Lahoma would come home for a visit. It was always an exciting time. She would show us pictures of the places she danced, and tell us about the famous people she knew. She dated a popular song writer of the day, Johnny Cola, who had written a new song, Vienni Su, that we were all hoping would be a success, for her sake.

Once she took me to a major production down at the Municipal Auditorium, just the two of us. It starred Victor Borga. There was singing and dancing, and of course he played the piano. Lahoma was very critical of the dancers. During the performance she pointed out all the things they were doing wrong. It impressed me that although she was a burlesque queen, she was still a serious dancer.

I’ll finish with a picture of me in one on Lahoma’s more traditional head dresses. I wore it on 89er’s Day at our school’s annual reenactment of the 1889 land run into Indian Territory by early settlers. Even at an early age I knew that not everyone was happy about taking away the Indians’ land. 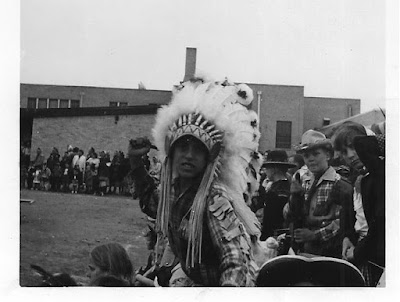 That’s a tomahawk in my right hand.

If you like my blog, read the book.
Wenonah's Story was a joint effort by my mother, James Wenonah Paul Gunning, and by me, to tell her story. Although I wrote the book, the stories are hers, so I wrote them in her voice and when I could I used her own words. She read most of what I wrote before her death in 2010,
Wenonah takes us from the days of the Wild West, when her parents were married, through the last days of the Chickasaw Nation, the coming of statehood, through the dustbowl and the Great Depression.
She tells of her childhood, about fighting with her brother Bob, about almost drowning in Rush Creek, about gathering kindling for her mother's wood burning stove, and exchanging pecans at the produce house to make 5 cents to go to a silent movie, about raising a calf, racing the horses, and hunting for rabbits.
She tells about her experiences at Bloomfield, a school for Chickasaw girls, and her struggles going to college during the depression.
Wenonah's Story is about an ornery kid who grew into a strong, responsible woman, and about a family which overcame hardship and tragedy by working together and helping each other.
To order a book, go to ChickasawPress.com or call them at 580-436-7282. Wenonah's Story is also available on Amazon.

Robin R Gunning
Lone Tree, Colorado, United States
I'm a retired physician, almost 70 years old. My hobbies are writing, hiking, and playing the violin. Ever since childhood I've enjoyed listening to stories, and the best stories I've heard by far are the ones my mother told me.